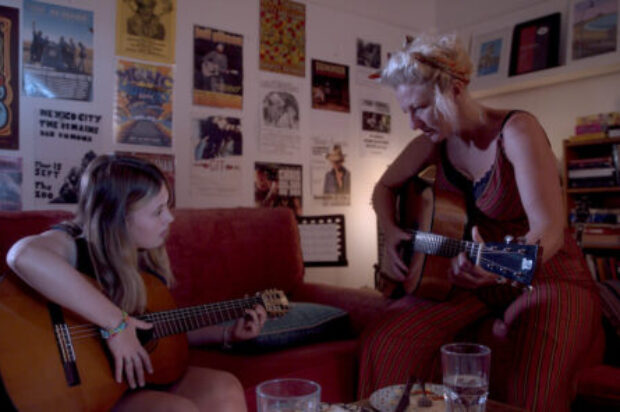 ‘THREE CHORDS AND THE TRUTH’

Three Chords and the Truth, the debut feature film from Claire Pazlovsky, starring Brisbane musican Jackie Marshall, will have its World Premiere at the Brisbane International Film Festival on November 2.

Also starring up and coming actor Maisie Owens (Bump), Three Chords and the Truth is the story of a rebel musician who, facing her impending death, lets a teenage runaway into her heart and home, and teaches her to write songs as a way to heal the past.

The film is loosely based on musician Jackie Marshall’s own life story. Jackie also wrote and performed the original songs on the film, which also features special appearances by television personalities Richard Wilkins and Julia Zemiro.

Claire Pasvolsky’s documentary short film Big Sky Girls recently screened at Cinequest in the US and, in 2020, the feature documentary which Claire produced, Calibrate, won LA’s Awareness Festival People’s Choice Award for Best Documentary Feature. The film is currently screening in festivals around the world.

Claire began her career in theatre, training as an actor and then creating her company “The Judas Tree” in Sydney, which championed the new works of emerging Australian playwrights. She has written and directed many professional theatre productions including “Spoon River Anthology” (based on the poetry of Edgar Lee Masters) and adapted Georg Buchner’s “Woyzeck”.

Three Chords and the Truth is her first feature film.

She says: “I set out to make a beautiful and moving film that involved music and which told the story of two women, one at the end of her life and the other just beginning her adulthood. I wanted to explore what could happen if a homeless young girl is shown kindness by a stranger at a pivotal time in her life”.

“Jackie Marshall was always going to be the star of the film. When I met her, I was struck by her presence, musicianship and highly original song-writing style. I wondered why I had never heard of her before. It was a very instinctual feeling of knowing that casting Jackie in a role that is very loosely based on her personal story would work. Pairing Jackie with the extraordinary actor Maisie Owens, who plays Ruby, was a truly wonderful and collaborative experience.”

The film is produced and edited by Steve Pasvolsky, whose short film Inja was nominated for an Academy Award and who has gone on to make documentaries including John Eales Revels: The Haka, a feature documentary for Discovery Channel, which won a Medal at the Olympic Committee’s Sports Press Association Awards (2019) for journalism.