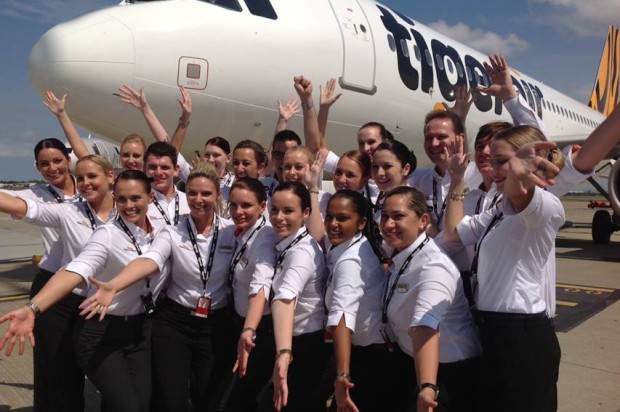 22 February 2014: Tigerair Australia welcomes the first group of its new Queensland cabin crew recruits which graduated this week, following an intensive four and a half weeks of training. The new cabin crew will take their positions ahead of the launch of the new Brisbane base, which commences operations on 11 March 2014.

A second group of cabin crew will graduate on Tuesday, 25 February 2014 to fill the 50 cabin crew/cabin crew manager positions required to facilitate the opening of the new Queensland base.

Head of Inflight Services, Amanda Craig says that Tigerair has been impressed by the talent pool in Brisbane.

“We’ve been really happy with the professionalism and high calibre of candidates in Queensland. The response to our recruitment drive has been fantastic.

“Tigerair is a brand that is all about enabling everyday Australians to see more of their backyard more often. We’ve been keen to recruit people with the right customer focused attitude and a “can do” spirit, as well as having some mandatory pre-requisites.

“Tigerair is thrilled to be expanding services in Australia and creating a significant number of jobs for the state of Queensland in the process,” she says.

Tigerair is currently recruiting to fill over 100 new jobs in Queensland for its new Brisbane base, including the 50 cabin crew and 40 pilots as well as indirectly providing over 50 additional ground and maintenance positions around Australia.

The four and a half week cabin crew training course includes safety, emergency and standard operating procedures as well as customer service delivery, to name a few.

After graduation, the cabin crew undertake observational training inflight, followed by a final flight check, before being ready to take to the skies from their new Brisbane base on 11 March 2014.

Key facts:
· Tigerair’s new Brisbane base commences operations from 11 March 2014.
· Two brand new A320 aircraft will commence operations from 11 March and 15 April respectively from the new Queensland base.
· Tigerair Australia already provides over 1,000 jobs in Australia directly and indirectly.
· The new Brisbane base creates approximately 120 new employment positions in Brisbane and more than 50 additional ground based roles in other key ports around Australia.
· As part of Tigerair’s growth plans, five new routes will be launched over coming weeks – most of them from the new Brisbane base (Brisbane – Adelaide, Brisbane – Darwin, Brisbane – Cairns as well as Sydney – Adelaide and Sydney Whitsunday Coast).
· Queensland will benefit from close to 800,000 additional visitor seats annually from mid-April 2014 when the two new aircraft are operational from the new base.
· New South Wales will receive more than 300,000 additional visitor seats through Sydney Airport annually.
· Victoria will receive more than 300,000 additional visitor seats through Melbourne Airport (Tullamarine) annually.
· South Australia tourism will be boosted in excess of 240,000 additional visitor seats through Adelaide Airport each year providing more than 70% growth to the region.
· New services between Brisbane and Darwin will boost Tigerair’s presence in the Northern Territory by more than 130,000 visitor seats annually.
· New Sydney – Whitsunday Coast/Whitsunday Coast – Sydney services commencing 1 April 2014 will deliver over 55,000 visitor seats annually to the Whitsundays’ doorstep.
Further network developments will be driven by our customer demand. These will be announced in due course.