Tigerair Has Launched Its Queensland Base 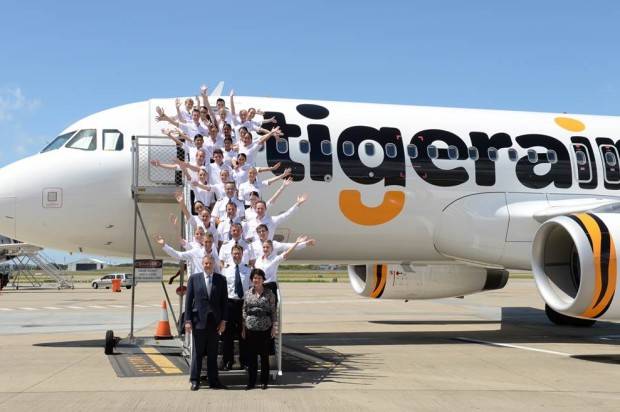 Tigerair Australia has today officially marked the launch of its new Queensland base, it’s third in Australia, with the arrival of a brand new aircraft in Brisbane, the commencement of two new routes today and the launch of Web Check services across its entire network.

Mr. Sharp also today unveiled the expansion of the airline’s partnership with BAE Systems to undertake the airline’s line maintenance, which will create an additional 40 full time new jobs in Melbourne, Sydney and at the new Brisbane base. In total the new Queensland base will create over 200 new employment positions in Australia (and over 130 of these will be in Brisbane).

Two brand new Airbus A320 aircraft will call Brisbane home (one from today and another one from 15 April), providing over 130 new jobs in Brisbane and adding around 800,000 additional visitor seats around Australia annually, significantly boosting domestic tourism for five Australian states.

As part of the base announcement, the airline will today commence inaugural flights between Brisbane and Adelaide and Sydney and Adelaide. A celebratory “fly one way and return for $1*” sale on the new Brisbane – Adelaide route, commences at midday AEDST today, for 48 hours or until sold out.

All Tigerair passengers will also benefit from the airline’s new Web Check facility which is live now across the network allowing customers the convenience of by-passing queues at the check-in counter.

Tigerair Australia CEO Rob Sharp said “This is a significant milestone for our airline, which is embarking on its future Australian expansion as planned, and great news for the domestic aviation sector, for consumers and for Australian tourism on multiple levels.

“When the airline rebranded in July last year, we promised more choice for consumers. Today is the start of delivering on this commitment. We are putting the customer and what they want at the forefront of our business.

“Budget travel options at Brisbane have lagged behind other major airports. Historically, budget travel has accounted for only 19% of Brisbane’s overall airport capacity, against 33% and 26% respectively in Melbourne and Sydney. We are responding to this demand for budget travel.

“Our fares have been proven to stimulate markets and we strongly believe in the potential this new base presents.

“With our new base operational from April 2014, Queensland will account for 59% of our total capacity (59% of all Tigerair seats will touch Queensland from April next year) and is therefore a critically important market for Tigerair. I’m delighted to be announcing the launch of our new base here in Brisbane today.

“Today also sees a realisation of our focus on customer experience and the desire to innovate as we officially launch our new Web Check service across our entire network.

“Furthermore our extended partnership with BAE Systems reinforces Tigerair’s commitment to strengthen the operational performance of the airline as part of a long term business strategy.”

Andrew Brodie, General Manager Brisbane Airport Corporation (BAC) Airline and Retail Management said the launch of Tigerair’s Brisbane base was a win for everyone.

“I’d like to congratulate CEO Rob Sharp on today’s launch and warmly welcome the Tigerair team to their new home at Brisbane Airport,” Mr Brodie said.

“The Tigerair base provides more than 130 new jobs, from the flight and cabin crews to additional ground staff, with 59% of Tigerair services touching Queensland.”

Speaking at Brisbane Domestic Airport, the Minister said the activation of the new base of operations was the latest chapter in Tigerair’s seven-year association with Queensland.

“This new base will generate more than 130 new jobs for Queensland and will be the local hub for flight and cabin crew, and ground-based staff, and two A320 aircraft.”

Ms Stuckey said it comes as no surprise that Queensland routes now account for almost 60 per cent of Tigerair’s total capacity.

“The Newman Government is been working hard to maximise visitor numbers to the State and achieve our goal of doubling annual overnight visitor expenditure from $15 billion in 2010 to $30 billion by 2020,” Ms Stuckey said.

“Iconic Queensland destinations such as the Sunshine and Gold Coasts, and Mackay, have been part of Tigerair’s flight schedule since 2007.

“I’m delighted to see Cairns and the Whitsundays added to that list, as well as routes including Brisbane to Cairns, Darwin and Adelaide, which when combined, provide 800,000 additional visitor seats in Queensland every year.”