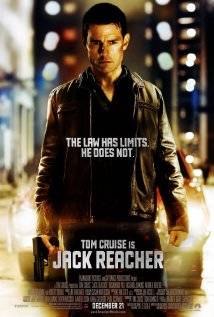 Given that the character of Jack Reacher has been around since 1997, when he was first introduced through Lee Childs’ novel ‘Killing Floor’, and has a series of 17 novels to his name it’s surprising that it has taken this long to see him in a cinematic form, but seeing as how we all know the current state of Hollywood’s originality, no doubt they saw an opportunity here with the intent of creating a new series ala Bourne or Bond.  The character of Jack Reacher, as described by Childs, is a brooding 200+pound hulk of a man standing at 6’5 with icy blue eyes and dirty blonde hair – basically everything Tom Cruise isn’t, and yet the pint sized actioner has taken on the character for his own self-titled film outing.  Fans of the novels were understandably outraged at the notion of Cruise in the role, and I unfortunately can’t do or say much to ease their fears.  I can, however, encourage them to give it a shot as it’s far from a disappointing venture in film terms and Cruise does have the right cocky-come-confident swagger needed to demand the kind of attention you imagine Reacher achieves in his novel form.

The film, based on the novel ‘One Shot’, opens with what appears to be a random sniper attack in daytime Pittsburgh.  Given the recent real-life events in the US, this is quite a bold, and slightly unsettling, introduction but thankfully it’s handled in such a way that it never feels gratuitous.  The methodical precision in the snipers attack is a major factor for Reacher who sets out to investigate the shooting, as he is certain the man being held responsible isn’t guilty; It isn’t giving anything away either when I say that we know our alleged shooter is innocent too.  Without much introduction or initial backstory Reacher just seems to appear in the film ready to examine the facts of the case, assisting defence lawyer Helen Rodin (Rosamund Pike) along the way.  It’s far too easy to pick apart the character of Helen as she seems to constantly be pressing for answers and facts and then when Reacher presents her with something she questions it, so I’ll leave it at she’s as typical as we’d expect her to be but it’s a major plus she’s played by someone like Pike who makes her more bearable.

In fact a lot of the film’s points come from its ensemble cast that also includes Robert Duvall, in a neat supporting role playing a former Marine whose shooting range proves an asset to Reacher, and the always enjoyable Richard Jenkins as Rodin’s district attorney father who may or may not be a valuable player in the investigation.  Australia’s rising talent Jai Courtney (formerly on ‘Packed to the Rafters’ and soon to be playing Bruce Willis’ son in the upcoming ‘Die Hard’ sequel) has one of the showier roles in the film as a henchman who is all too eager to go toe-to-toe with Reacher, and their showdown, whilst quite short, provides one of the more exciting action sequences in the film, sequences that are surprisingly in low capacity.  As much as this has been advertised as an action film, and there are some stellar ones on offer namely a midway-point car chase that is by far one of the more intense scenes put to screen, ‘Jack Reacher’ plays out like an investigative mystery with a handful of action extracts thrown in for good measure.

All in all it ends up being quite a mixed bag from director Christopher McQuarrie who adopts a certain ‘low-key’ look for the film stripping back the action to be as realistic as possible with minimal effects, but over-stuffing the script with stylised lines like “I mean to beat you to death and drink your blood from a boot”; it sounds cool but doesn’t exactly gel with McQuarrie’s aesthetics.  It also doesn’t help that at 130 minutes the film overstays its welcome, packing in several filler scenes that add little to the overall outcome, and I dare say that a good 30 minute trim wouldn’t do the film a disservice.

However inconsistent it may be, when it’s at its best it is particularly enjoyable and I can easily see this becoming a franchise, an idea that no doubt continues to eat away at Lee Child enthusiasts who can’t believe their colossal hero has been reduced down to pocket size.  With the general consensus being ‘the film is never as good as the book’, maybe readers can count it as a blessing they won’t have to see if this is one adaptation that got it right.