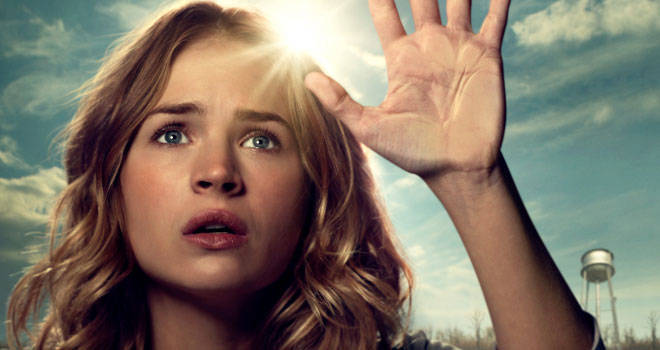 You know that feeling of waiting anxiously in line for two hours for a particular attraction only to have the fun be over in about five minutes once it’s been experienced? That’s essentially how one feels exiting ‘Tomorrowland’, a strange misfire of a production from the usually reliable Walt Disney Corporation that promises intrigue and adventure but rarely lives up to the potential it so clearly holds. Under the direction of Brad Bird (a filmmaker with a significantly strong resume that includes ‘The Incredibles’ and ‘Mission: Impossible – Ghost Protocol’), the film arrives with an air of mystery preceding it as the marketing team did an admittedly stellar job at keeping details of the film at bay. Just what was it all about? What spectacular sights will be seen? So much promise of something genuinely exciting for young children to get actively involved in arrives almost dead on arrival, leaving ‘Tomorrowland’ a head-scratcher of a feature that leaves you pondering “if only”.

It gets off to a promising start though as we view George Clooney and Britt Robertson argue ever-so-adorably over the correct way to address the audience and get them up to speed as to what’s happening. Clooney’s gruff Frank Walker initially wins the argument, taking us back to the 1964 New York World’s Fair where a young Frank (Thomas Robinson) is hoping to impress a series of judges, namely the rather snooty Nix (Hugh Laurie), with his jetpack invention. Failing to do so, he finds comfort in the company of the curious Athena (Raffey Cassidy), a young girl who hands Frank a mysterious Tomorrowland branded pin, and beckons him to follow her on to the ‘It’s A Small World’ attraction. In doing so he realises this is no ordinary ride and, thanks to the pin, he’s whisked away to the titular destination where an alternate universe awaits; this futuristic glimpse into Tomorrowland, complete with robots, advanced gadgetry and flying monorails, highlights the potential Bird and co. so sadly underutilised.

As we start to invest ourselves in the joyous Disney-ness that is young Frank’s adventure, the film abruptly shifts gears to focus on Robertson’s character, a plucky tomboy named Casey who’s a little too good at breaking the law; this being a family film though means her misdemeanours are on the lighter side with her arrest culminating from her attempts at dismantling a crane that are themselves dismantling a rocket platform, all in the name of shelving the lay-off of her soon-to-be-unemployed NASA worker father (Tim McGraw). Arrested for trespassing, Casey is in and out of jail in record time and as she gathers her belongings, inexplicably the Tomorrowland pin is included and as she touches it she finds herself transported to the world where futuristic prospective waits. Adapting alarmingly quickly to a situation where visiting the future is a reality, Casey eventually tracks down the now-adult Frank, a hermit of sorts who lives a bitter existence in his well-guarded, and unassuming, home having been forbidden to ever re-enter Tomorrowland. This first meeting between the two temporarily jolts the film into action status as Frank’s house comes under attack from a series of male mannequin-esque secret agents who don’t take too kindly to Casey’s possession of the pin, and his gadget-ridden home allows the film to push the boundaries of its PG rating; decapitations and pummelling by way of baseball bat seem to be acceptable as long as no blood is shown and the victims are non-human.

The reappearance of Athena, who hasn’t aged a day since we saw her in 1964, propels the film forward as it becomes somewhat of a road movie as Frank and Casey bicker and banter their way through various sites, eventually leading to Paris where we learn the Eiffel Tower isn’t the monument we always knew it be (another example of the film teasing its potential) before our trio finally set foot in Tomorrowland, allowing Casey to discover just why its future is so reliant on her actions. By this point we can only hope that a rousing finale will act as a saving grace for the film that bizarrely foregoes any in-depth backstory to Tomorrowland, leaving us with more questions than answers; perhaps we shouldn’t be overly surprised though given that ‘Lost’ scribe Damon Lindelof is on the scriptwriting credits. Sadly ‘Tomorrowland’ opts to take the heavy-handed preachy route over a spectacle-filled third act, where Nix reappears to basically chastise humanity for being a vain, selfish species who only have themselves to blame for all the disasters of the world that they experience. I’m not against a good message being relayed through entertainment, and I can see how ‘Tomorrowland’ wants to make its mark, but it comes across a bit too self-righteous for its own good, and if the idea of the film was to somehow enlighten the young audience it so clearly wants to appeal to, it’s likely to cause the opposite effect and alienate them.

A missed opportunity if ever there was one, ‘Tomorrowland’ offers sporadic moments of genuine enjoyment and interest – there’s no denying Bird’s skill as an action choreographer – with the special effects suitably top-shelf and the acting all-around acceptable (Robertson is particularly enthusiastic), and whilst the filmmakers shouldn’t be condemned for wanting to make a virtuous project that speaks from a place of concern, their approach however hasn’t met the target as desired and, sadly, audiences are likely to tune out over tuning in.