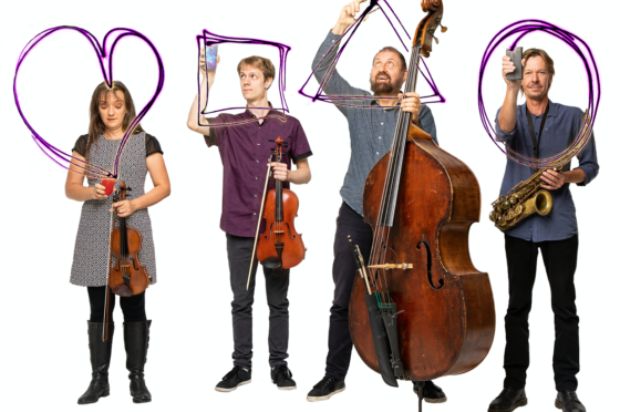 Musica Viva In Schools has taken its program completely online to support schools during COVID- 19 and beyond. Topology participates enthusiastically in this program providing online performances and teaching resources to Central Queensland and Northern New South Wales primary classrooms. 15 Musica Viva In Schools Topology performances are booked with more to follow.

Topology has an unmatched style, unique approach to collaborations, cross genre creative projects and mentorship of young composers and artists. Winning numerous awards for the Topology Education program “Top Up”, the organisation has also won the APRA Award for Excellence by an Organisation in 2008.

Top Up has been running successfully for over two-decades bringing music and creative empowerment to individuals, schools and communities. Under the Top Up umbrella, the Launchpad Mentorship Program has been providing valuable guidance to emerging composers since 2015. This year’s Launchpad composition participants each expressed an interest in choral works and Topology are pleased to announce Launchpad mentor, Australian composer and conductor, Isabella Gerometta. Isabella has prepared and directed choruses for a number of events with the Queensland Symphony Orchestra, working alongside internationally recognised conductors such as Simone Young and Alondra de la Parra. She has also co-directed a number of concerts for The Australian Voices, including Everyday Requiem in collaboration with Expressions Dance Company in 2018.

Topology Creative Director, Christa Powell (violin) said “Topology believes that everyone is creative. Through Launchpad we are able to provide a tailored and one-on-one year-round mentorship program to nurture and empower emerging composers regardless of their age, place and background. Launchpad guides them, not only through the creative work, but also the professional practice of being a composer. We are thrilled to have Isabella Gerometta guiding our three 2020 participants who will also gain knowledge from inhouse Topology composers Dr Robert Davidson and John Babbage and Topology industry professionals Melanie Doheny and Gabby Gregory throughout the year-round program. It is also wonderful to still be playing music during these restricted times albeit virtually. We are proud of our award-winning education platform TOP UP and thrive on bringing music to students via our participation within the Musica Viva In Schools tour. All children deserve to experience the power and wonder of music and Topology has a proud 23-year history as passionate music educators.”

The signature works culminating from the Launchpad 2020 program will be performed by Topology during 2021.

The mentees for Launchpad 2020 are:

Samuel Carrick is a 2nd year Composition student at the Queensland Conservatorium, with significant experience as a chorister and emerging composer.

Francesca Brzoskowski is a classical jazz pianist, producer, artist and writer based in the Redlands. Combined with her background in theatre, choral and vocal training, Francesca’s composing range is diverse.

Andrew Udal is a winner of the 2019 ASME Young Composers Competition, which has granted his participation in Launchpad 2020. Based in Bundaberg, Andrew has only been composing for 18 months but already has a few accolades under his belt including 3rd Place in the 2019 Score It! Competition and being the sole Australian Finalist in the 2019 Commonwealth International Composition Award.

Topology released last Friday, June 19 their 16th album, concept EP We Will Rise, a specially curated album of past and new signature works. BUY ALBUM + BUY SHEET MUSIC | We Will Rise is available on all digital platforms including: https://ffm.to/wewillrise Sheet music can also be purchased at the Topology store (https://www.topologymusic.com/product-category/sheet- music/).

Topology’s THREE national tour will reignite later this year, along with a new major creative project to be launched in 2021.

Established leaders and ambassadors for musical creativity in Australia, Topology continues to excel in creating original music, connecting artists through collaboration and enriching communities and audiences through shared creative and educational adventures.