“The Murders of Tupac and Biggie Greg Kading hip hop Netflix true crime tours by Caroline Russo | on July 8, 2019 | 0 comments | in Book Reviews | Like it 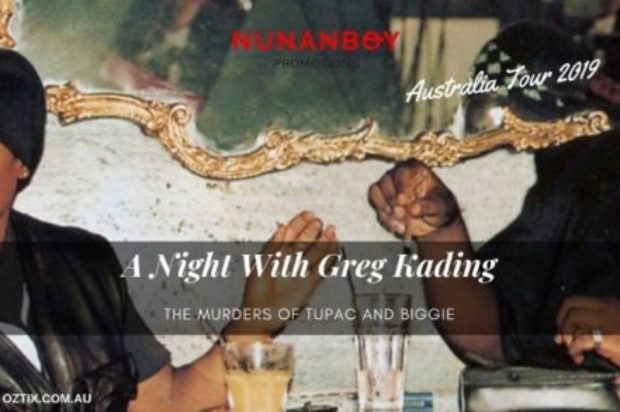 Are you a lover of true crime? Do you also love 90s hip hop? Look no further! An upcoming national show from Nunanboy Promotions, “The Murders of Tupac and Biggie – A night with Greg Kading”, is for you.

Greg Kading, the lead detective of the investigative task force for the infamous Tupac and B.I.G case, is coming to Australia to embark on a world first, live show. He will reveal never-before-known details of the case and will discuss his particular vantage on the evidence and investigation of both rappers’ deaths. He will explain the problems with conspiracy theories surrounding the murders, and why, when looked at objectively, all facts point to one conclusion.

The national tour is a story of violent street gangs, betrayal, money and one of the most famous rivalries in rap music history, and it kicks off on in Brisbane on the 26th July 2019.

Greg is a veteran LAPD detective who specialises in gang, narcotic and homicide investigations. After his retirement in 2010, Greg authored the book Murder Rap which details his experience investigating the murders, which led to the NBC/Universal and Netflix true-crime drama series, Unsolved: The Murders of Tupac Shakur and Biggie Smalls. The iconic Josh Duhamel starred as Greg Kading.

Nick Nunan, founder of Nunanboy Promotions says, “We’re taking people back to the 1990s with this tour. It’s unlike any show you’ve seen before, as we’ve masterfully merged a speaking tour with a musical component.”

He continues, “Biggie and Tupac continue to be two of the most influential hip hop artists. Their unsolved murders spark interest worldwide and Greg will share the reasons as to why he believes he has solved the murders during the shows. It’s a must see for anyone who loves anything to do with pop-culture, crime, cold cases, or music.”

Music from both artists will be featured in the shows, together with MC Nick Nunan. Mob James (James McDonald) will also be present, discussing the harsh reality of his work with Deathrow Records and what it was like to be in Vegas the night Tupac was shot.

For tickets for all venues, please visit here.