The 27-year-old was found by police with a single injury to the upper torso at around 6.30am on Sunday at his mother’s Calabasas mansion in California.

Lisa Marie – only child of superstar Elvis Presely heldver close to her son and had previously spoken of similarity to Elvis, calling their resemblance ‘uncanny’. 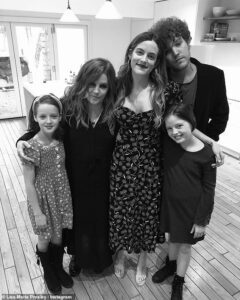 In June last year the mother of four shared a sweet snap with all of her children, writing: ‘Mama Lion with the cubs.’

Lisa Marie’s manager, has stated: ‘She is completely heartbroken, inconsolable and beyond devastated but trying to stay strong for her 11-year-old twins and her oldest daughter Riley. She adored that boy. He was the love of her life.’

Police said they responded to a ‘rescue response’ call at about 6:30am Sunday, adding: ‘Upon their arrival, they located the victim suffering from one gunshot wound to the upper torso. The victim was pronounced dead at the scene.’
The shock has hit world wide and trubutes are flowing to the family.
Nancy Sinatra tweeted: ‘I have known you since before your mama gave birth to you, never dreaming you would have pain like this in your life. I’m so very sorry.’

And another friend of Benjamin’s, Musician DJ Ashba, wrote: ‘This cuts me to the bone. Literally in shock. I loved Ben like a brother and always will. Till we meet again my friend.’

Roy Orbison Jr, son of the famous rock n roller, said: ‘Everybody please pray for Elvis Presley’s family. They have had another terrible tragedy today.’

Benjamin’s mother was born in 1977, the only child of Elvis and Priscilla Presley, Lisa Marie lost her father just nine years later to heart failure.

She married Benjamin’s father, Keough – her first of four husbands – in 1988.

The couple had two children together, Benjamin and his sister, the actress Riley Keough who is married to her Mad Max co-star Ben Smith-Petersen.

In 2009 Benjamin, who kept a low public profile, was reported to have signed a $5million record deal with Universal.

A source close to the family has claimed that Benjamin had been ‘struggling’ for a long time and the death, though shocking, won’t have come as a ‘huge surprise’ to the family.
June last year it was stated in news that Lisa Marie opened up about her struggles with ‘opioids and painkillers’ in an essay penned for the forward of the book The United States of Opioids: A Prescription for Liberating a Nation in Pain by Harry Nelson.

She warned of the dangers of prescription drugs as she explained how easily her addiction began after being prescribed painkillers following the birth of her twin daughters in 2008.