Adam Harvey The Great Country Songbook Troy Cassar-Daley by Caroline Russo | on March 3, 2013 | 0 comments | in Hush Hush Gossip | Like it 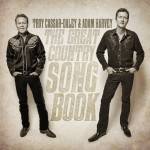 Followed by a national tour to commence August 1st 2013

Renowned for their showmanship and engaging live performances, Troy and Adam have earned the respect of their peers and the greater entertainment audiences for their superb vocals, quality musicianship, song writing skills and ultimately their individual recorded releases.

Over the years, Troy and Adam have become great friends.  Out of that bond – and the odd jam session now and again – came the decision to get together and hit the road at least once a year to perform their favourite country classic tracks for their fans.  Not easy when more often as not, they both have their own new releases to promote and their own tours out on the road but somehow they manage to juggle their diaries and dates to make it happen.   Although often rivals when it comes to Music industry awards, you only have see Troy and Adam on stage together with their witty banter and genuine admiration for each other’s talent and music to realise their commitment to the country music industry and its fans.   You get a real understanding how the friendship has flourished.    Once you’ve seen their show, you’d also understand why after being asked by every second person during the after-show signings when they were going to produce an album with all the songs they enjoyed belting out to eager crowds nightly,  Troy and Adam decided the time was right now.

The Great Country Songbook features some of the best known tracks, many which the guys have performed numerous times over the years.  The result is a lovingly hand-picked bunch of songs, top-heavy with their biggest personal influences: Johnny Cash, Willie Nelson, Merle Haggard, George Jones, Hank Williams, Glen Campbell, and Aussie country icon Slim Dusty. Simply, all the songs they both could not live without included on their first ever, highly anticipated combined album. These include Country classics such as Behind Closed Doors, He Stopped Loving Her Today; duets include Seven Spanish Angels, plus a medley of Country gold: Thank God I’m a Country Boy/On The Road Again/Before the Next Teardrop Falls.

This Aussie country coupling proved so synergistically perfect it was only fitting to cut their beloved tracks to an album, and continue touring those songs around the country.  The Great Country Songbook In Concert will hit the road in August 2013 – tour dates below.

“The Great Country Songbook” is a career highlight for both Troy Cassar-Daley and Adam Harvey, and will no doubt go down as one of the greatest country albums of our time.  The national tour will allow them to once again enthral and entertain audiences with these classic songs.

“The Great Country Songbook” will be released June 14th 2013

The tour dates for Troy and Adam’s “The Great Country Songbook” tour are as follows:

Taking this show on the road has demonstrated to both Troy Cassar-Daley and Adam Harvey that the enthusiasm for this duo and their combined show never wanes: tickets for this tour will sell out fast.