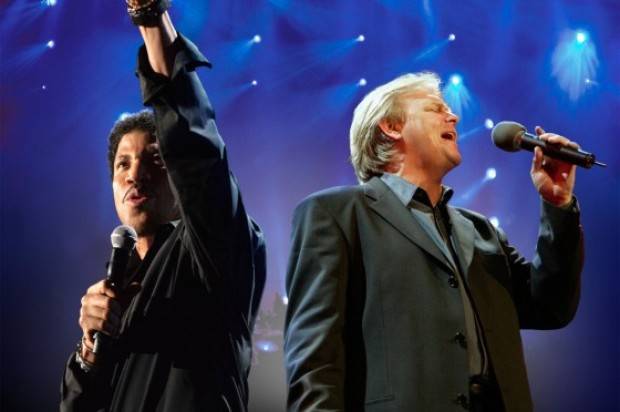 LIONEL RICHIE AND JOHN FARNHAM
ONE STAGE, TWO MUSIC LEGENDS
ALL THE HITS – ALL NIGHT LONG

Dainty Group is proud to announce superstars Lionel Richie and John Farnham will perform in a co-headlining tour across Australia in March 2014 with tickets going on sale on Friday 29th November.

Lionel Richie and John Farnham will perform sets with their own band and singers.

Promoter Paul Dainty said: “I am always thrilled when a superstar wants to tour. But when two legends agree to take their magic on the road – that’s truly an honour.”

Five-time Grammy winner Lionel Richie is a music icon known for his solo hits and as a member of the Commodores. Collectively he has sold more than 100 million albums, and written and recorded chart-topping hits including “Hello” “Easy” and “All Night Long.”

John Farnham, a master performer whose classic album “Whispering Jack” is owned by one in four Australians, has a long-held nickname that still says it all: The Voice. This year, Farnham was voted best Australian singer of all time in a poll of 100 singers and musicians.

Lionel Richie and John Farnham promises to be a unique, not-to-be-missed concert event.

Farnham, a wide-eyed soul fanatic who has performed on the same stage as his heroes Ray Charles and Stevie Wonder, reveals a co-headlining tour with the legendary Lionel Richie was also on his wish list.

Speaking about John, Lionel said, smiling “He pours his heart into a ballad and gives everything to an anthem.”

Richie’s Australian shows come off the back of a US tour where the music legend received five-star reviews.

The Hollywood Reporter said: “Looking and sounding as good as he did a quarter century ago, he delivered a high energy set that mixed his trademark balladry with funkier songs from his Commodore days.”

The Houston Press added: “Lionel Richie has been helping us dance, cry, and love better than the sum of all of our current pop stars combined.”

And the Atlanta Constitution Journal summed it up simply: “Good times never felt so good.”

Music website Consequence of Sound said: “There are singers and there are performers and sometimes there are both. Few fit into that rare third category — especially today’s crop of artists — yet Lionel Richie has long been a general at the frontline. Having been active since 1968 with the Commodores, Richie’s catalog isn’t just rich, but incredibly lush. He’s got hits, he’s got ballads, he’s got rockers, he’s got lovemakers, he’s got funk anthems, he’s got reggae, he’s got it all.”

Lionel Richie rose from humble beginnings in Tuskegee, Alabama, to become one of the most influential figures in music.

Richie was singer, songwriter and frontman of the legendary band The Commodores, with hits including “Brick House” “Too Hot To Trot” and “Machine Gun.” He also wrote classic ballads while in The Commodores, including “Easy” “Sail On” and “Three Times A Lady.”

An Oscar and Golden Globe winner, Richie went solo in 1982 and dominated the decade with hits like “Truly” “You Are” “Say You Say Me” “Ballerina Girl” “Running With The Night” and “Dancing On The Ceiling.”

His latest album, Tuskegee, featuring duets with country superstars including Tim McGraw, Willie Nelson, Blake Shelton and Shania Twain, went to No.1 on the Billboard chart, and sold more than one million copies.

Farnham’s last outing, two years ago, made the Melbourne Herald Sun note: “It’s a mix of his charm with that voice and those songs that keep filling venues.”

John Farnham is a former child star who released his first hit, “Sadie The Cleaning Lady” in 1967.

A five times King of Pop winner, Farnham parlayed his teen idol fame into stage musicals, cabaret, and a stint with the Little River Band, fronting hits like “The Other Guy” and “Playing To Win.”

“Whispering Jack,” released in 1987, rebooted Farnham’s career as a headline act. Hits including “A Touch Of Paradise” “Pressure Down” and “Chain Reaction” followed.

A 15-time ARIA Award winner, Farnham was named Australian of the Year in 1988, made an Officer of the Order of Australia, in 1996, awarded a Centenary Medal in 2001, and inducted into the ARIA Hall of Fame in 2003.

Farnham holds the box office record for most number of arena shows by an Australian performer. His 2002 juggernaut tour, which ran the length and breadth of the continent for six months, was one of the highest grossing tours in Australian history.

Tickets go on sale at 10am on Friday 29th November
For further information go to: www.daintygroup.com

Tap King is pleased that its valued partnership with Lionel Richie is set to continue after announcing that it will be the major sponsor of his upcoming Australia tour.