food Food Festival UBUD FOOD FESTIVAL by Caroline Russo | on June 5, 2015 | 0 comments | in Lifestyle | Like it 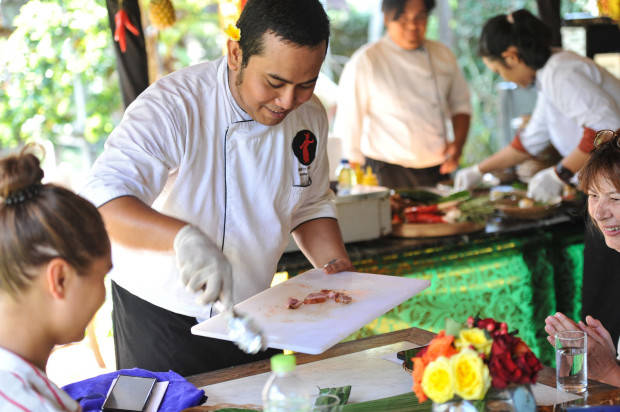 The inaugural Ubud Food Festival (UFF) has officially opened its doors to foodies from across Indonesia and the globe, with over 70 events taking place in Bali’s culinary capital over the next three days (5-7 June).
With the program spanning Cooking Demonstrations, Food Forums, Workshops and Masterclasses, Food Tours, Film Screenings, Night Markets, Book Launches and more, the UFF is anticipated to attract over 5,000 Festival-goers for its inaugural year.

Speaking at the UFF’s Gala Opening last night, Founder & Director of the Festival Janet DeNeefe said she was overwhelmed by the support of the global food community, without which the event would not have been possible.
“From the growers and makers to the commentators and appreciators, this Festival is a product of us all, and evidence of just how ready the world is to appreciate it,” she said

Amongst the honorary attendees of the HSBC Supported UFF Gala Opening, culinary icon Sri Owen was presented with the Ubud Food Festival’s Lifetime Achievement Award, in recognition of her contribution to bringing Indonesian cuisine to the world.

Celebrating her 80th birthday earlier this year, Owen returned to Indonesia for the Festival from her home in the England with the support of Garuda UK, her first trip back to Bali in over a decade.

“When the invitation came through Janet to attend to the Ubud Food Festival, I thought, who could resist that!” she said. “I miss everything about Indonesian food; the way you use your fingers, the way you eat with the family, with friends, at selamatan and Hari Raya and other festivities.”

Promoting Indonesia as one of the world’s leading culinary destinations, the UFF will host Australian BBQ fanatic Dave Pynt and former head-chef of Melbourne’s Vue de Monde Ryan Clift, along with one of the world’s most celebrated pastry chefs, Janice Wong and Malaysia’s acclaimed Chef Wan.

“After many months of planning, we’re so excited to finally have the Ubud Food Festival upon us,” Janet DeNeefe said. “We hope the next three days are just the first step in this exciting culinary journey we are embarking on”.

More Information
What: Ubud Food Festival: a three-day culinary adventure with Indonesian food as the star
When: 5 – 7 June, 2015
Where: The program will take place at two main venues in Ubud, Bali: Indus Restaurant and Taman Baca, both located on Jl. Raya Sanggingan.
Who: The full program is now available via the website (www.ubudfoodfestival.com)