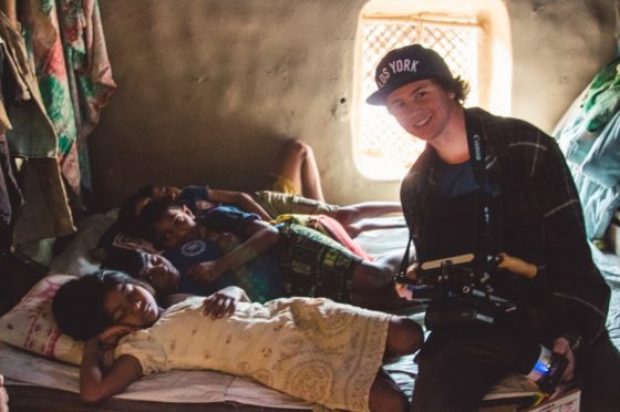 Fly to India, recruit a cast of villagers as actors, shoot a short film in three days and enter it in the Cannes Film Festival.

That’s the task Bond University’s Dane Holroyd, 20, set for himself over the New Year period. So far everything is going according to plan.

The graduate of Santa Barbara High School’s MAD Academy was studying film and television at Bond when the invitation came to direct the two-and-a-half minute film for charity PACE International.

Holroyd had planned on enjoying his first Aussie Christmas but took up the offer to help the charity which fights human trafficking in India by putting desperately poor girls through school.

Holroyd flew home and left Santa Barbara two days before New Year’s Eve 2017, teaming up with a producer and cameraman two hours’ drive from Kolkata in a village where girls had been sold into slavery.

“We were a little scared at first to be there,” Holroyd said. “What If the people smugglers wanted to mess with us?”

The film tells the true story of a seven-year-old victim.

Villagers, eager to help, stood in as actors.

“We just tried to put them in positions that they knew and have them forget about the massive camera in front of them,” Holroyd said.

“The mother’s performance is amazing. She’s never acted in her life.

“And the little girl, Kobeta? I could not have cast a better young actress in LA.”

Holroyd hopes to enter his work in the short film category of the Cannes Film Festival with help from some Hollywood film industry figures who were moved by the storyline.

“We have a composer and music editor on board from Paramount Studios. He’s currently working on the new Transformers.” Holroyd said.

“We sent him the piece and he composed a score for us. That soundtrack would have cost us $30,000.”

Holroyd said he hoped to “do a whole heap of film festivals” this year.

Holroyd is a keen surfer who grew up working at Channel Islands Surfboards in Santa Barbara.

After graduating from high school he interned in LA with Academy Award winner Robert Zemeckis, director of the Back to the Future trilogy and Forrest Gump.