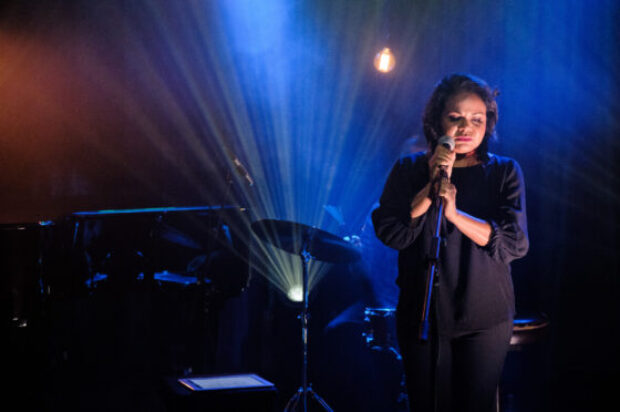 Multi-award-winning storyteller and First Nations woman Ursula Yovich has been selected, as ‘an extraordinarily compelling force’ and ‘an incredible artist’, to deliver the inaugural NAIDOC Week Lecture at NIDA on 12 November. This will be livestreamed online for the public.

Widely lauded for her work as an actor, playwright, singer and songwriter, Ursula grew up in Darwin and Maningrida. Her work in Barbara and the Camp Dogs, which she co-wrote with Alana Valentine and starred in, was described as ‘[ripping] open a chasm of pain’, ’plumbing gut-wrenching truths’ and ‘compelling empathy’ (Canberra Times).

Ursula’s NAIDOC Week Lecture is the first in a series that is planned to be at least a decade-long commitment, with a new, original commissioned lecture presented each year by a First Nations leader in the arts and culture sector.

About her lecture, Ursula says, ‘I am looking forward to discussing the cultural change that is needed in our industry to embrace diversity and increase inclusion in the arts. And it starts here in this institution.’

NIDA CEO Liz Hughes says, ‘I’m incredibly excited about launching this series. We really want to highlight important First Nations voices in the Australian cultural sector and ensure that they are heard loudly.

‘I’m delighted that Ursula Yovich, an incredible artist, will be the inaugural speaker of the NAIDOC Week Lecture Series at NIDA. Across her body of work, it is immediately apparent what an important voice she is.

‘Her authority, her integrity, her knowledge and her magnetic presence make her an extraordinarily compelling force – whether on stage, screen, through her writing, or any other medium.

‘The way she engages with performance and connects with an audience is immediate, I encourage everyone to join us online to hear her deliver the very first NAIDOC Week Lecture.’

The event will be hosted, remotely, by NIDA Board Member, Associate Professor Dr Sandra Phillips. Dr Phillips is Associate Dean (Indigenous Engagement) at the University of Queensland, a Visiting Fellow of the Musashino University’s Creating Happiness Incubation, and a Foundation Judge of the National Indigenous Story Awards. Dr Phillips is a Wakka Wakka woman who was raised on Country among extended family in rural southern Queensland.

The NAIDOC Week Lecture Series aims to resonate with industry and creative practitioners in the wider film, theatre and television sectors, as well as with NIDA’s students and staff.

This talk will be livestreamed via facebook.com/NIDAcommunity, or via registration from the NIDA website. More information here