Fashion Golden Bazaar The Grand Bazaar TUVANA BÜYÜKÇINAR DEMIR by Caroline Russo | on May 28, 2015 | 0 comments | in Fashion | Like it The Grand Bazaar, with its 550-year history, opened its historic doors for Tuvanam.

Tuvana Büyükçinar Demir returned to the Grand Bazaar, where she began her design journey, with a breathtaking fashion show that presented her first haute couture collection, Golden Bazaar. 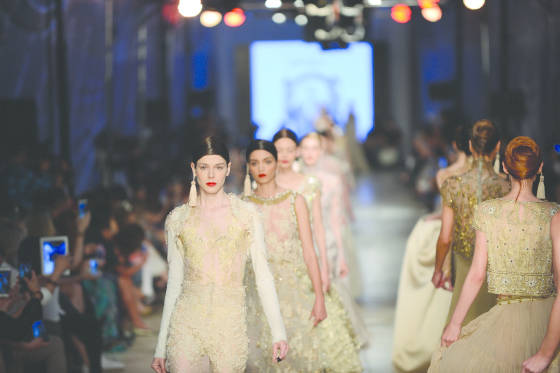 Sponsored by Emaar Turkey, the Turkish subsidiary of the world’s largest real estate firm, and supported by BMW’s Turkey distributor Borusan Otomotiv, Atelier Rebul, and Scholl, Tuvanam’s 25-piece Fall and Winter 2015–2016 Golden Bazaar collection was presented to an audience of celebrated members of society, as well as the art and fashion world.

The Grand Bazaar is currently undergoing extensive renovations to return it to its glory days, under the initiative of Fatih Mayor Mustafa Demir. This was the first time in the Bazaar’s history that it hosted a fashion show. Nearly 500 guests showed their support for Tuvana Büyükçinar Demir at the fashion show, which took place in the wonderful atmosphere of the Grand Bazaar. Guests gave Tuvana Büyükçinar Demir a standing ovation when she walked out at the very end to greet the audience.

Hacer Yeni penned a story inspired by the Grand Bazaar, and Atelier Rebul designed a perfume on the theme of the story exclusively for the fashion show.

The Tuvanam collection presents a timeless yet eclectic collection from an haute couture approach, and reveals a sophisticated and bohemian Tuvanam woman in all her glory.

Tuvana Büyükçinar Demir unveils a collection about a city that is home to the oldest bazaar in the world, where seasons are defined by the wind blows from the northeast or the southeast, and where women who love sunrises and sunsets roam. Romantic and decisive. Adventurous and fearless. 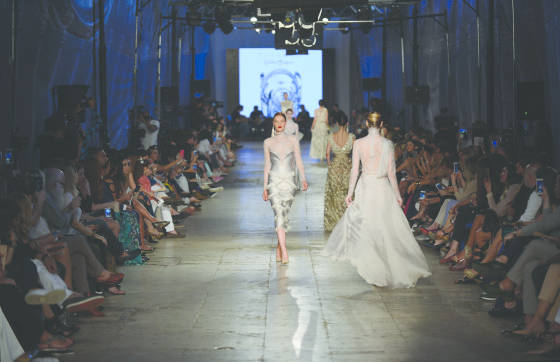 The designer takes us to a time that smells of sandalwood, with her unmatched haute couture dream made of gold dusted French lace and rich embroidery, which becomes more mysterious and sophisticated with transparent pieces.

The designs are in copper, pearl, stone, aged gold, and dust pink colors, and have pearl and crystal embroidery, threading on leather, and 3D embroidery. The aged gold and copper embroidery draw your eyes to the details.

The fashion show was choreographed by Öner Evez and styled by Hakan Öztürk, while the music was mixed by Dogus Çabakçor. Make-up was provided by Icon34 and hair by No 21 and Ibrahim Zengin. 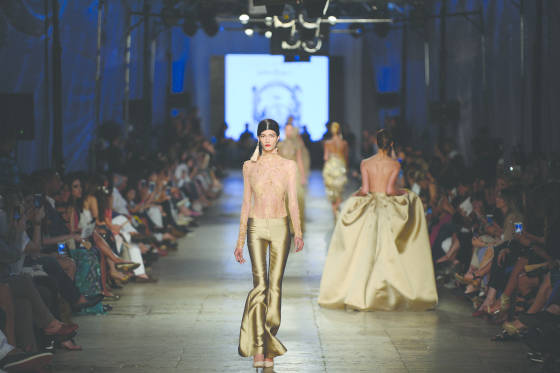