A Country Practice Peter Kinloch Skippy tribute Vale Moya Wood by Caroline Russo | on October 27, 2017 | 0 comments | in tribute | Like it 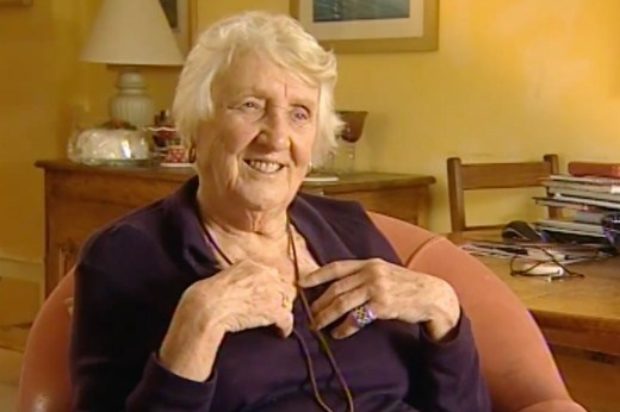 On 5 October 2017, Moya Wood passed away at age 83 at the Wolper Hospital’s Palliative Unit in Woollahra, Sydney, after a brief, but intense struggle with cancer.

Her impressive career as a writer/editor for film and television reaches back 60 years or more to the popular series Skippy where she soon rose to the position of script supervisor for Fauna Productions.

From Skippy, she moved to Melbourne in 1970 to work as a script editor on the Homicide, Division 4 andMatlock series for Crawford Productions. It was during her stint at Crawford’s that Moya met future longtime friend and soul mate, writer/producer, Lynn Bayonas.

Upon returning to Sydney in the mid-seventies, according to Moya, she was woken by an intruder clambering over her fence in the wee small hours and hammering at the back door. The intruder subsequently turned to be a desperate Bob Ellis chasing a deadline, insisting Moya help him sort out problems he was having with his screenplay for Newsfront. And of course Moya put the kettle on and willingly obliged.

During this period she also acted as script consultant for Cliff Green’s feature film Summerfield produced by Pat Lovell and directed by Ken Hannam, and Love Letters from Teralba Road directed by Stephen Wallace which went on to win 3 AFI Awards in 1977.

Shortly after, Moya teamed up with colleague Lynn Bayonas to write the bible for, then co-edit long-running TV series A Country Practice for James Davern’s JNProductions. It was also while at ACP she met and made another soul mate and friend for life in fellow writer and editor, Helen Steel.

Around 1980 Moya was approached to edit the feature script of Monkey Grip, produced by Pat Lovell and directed by Ken Cameron who co-wrote the script with Helen Garner, based on Helen’s novel of the same name. The film went on to win 2 AFI Awards and an AWGIE Award.

Following on the heels of Monkey Grip she was engaged by another friend of long standing, producer, Jill Robb, to develop and write the screenplay for the feature The More Things Change, directed by Robyn Nevin, which went on to earn 6 nominations at the 1986 AFI Awards, including Best Screenplay.

An offer then came from Penny Chapman and close friend, Jackie McKimmie for Moya to edit Jackie’s screenplay for her feature Waiting. The film went on to win 2 AFI Awards in 1991 and receive a further 3 nominations.

Moya’s last venture into scriptwriting was in 2008, completing the screenplay based on the life of war heroine Nancy Wake for producer/director Bruce Beresford which is still awaiting financing. She was also made a life member of the Australian Writers’ Guild in 2009.

Moya had two recreational passions, dancing and music, specifically blues and jazz music. Her tastes ranged from the blues of Billie Holliday to the big band sounds of Basie and Ellington, to the freeform jazz of Charlie Parker and Miles Davis. Frequent visits to local Sydney jazz venue “The Basement” resulted in the forming of yet another lifelong friendship with co-proprietor Horst Liepolt. Horst later left Sydney to set up and manage the “Sweet Basil” jazz club in New York City and rang Moya every day on learning of her admission to the Wolper.

One stylistic trademark of Moya’s over the years was the sporting of a rather dashing black eyepatch after contracting an eye infection while swimming in Spain in the late sixties, and which despite extensive treatment over the years, eventually cost her the vision in the eye.

She more than made up for the loss with another Moya trademark, an increasingly powerful magnifying glass.

She loved taking constitutional walks in nearby Centennial Park and at 83, was still going for weekly workouts at her local gym right up until the week of the diagnosis.

When I worked on projects with Moya she often used the word “derivative” to describe a piece of work. The last time I’d heard the word was in high school chemistry classes, but to Moya the word meant the work was alloyed or diluted in some way and thus compromised. Moya always searched passionately for the elusive spark of truth and originality in everything she read or wrote or listened to, which is only fitting because, with her rib-tickling sense of humour and smothered guffaw of laughter, she was, herself, that most unique of rarities, a true original.

Moya will be sadly missed by those who knew and worked with her over the years, and particularly by members of her family, including sister, Jan, sisters-in-law Robyn, Simone and Glenys and a host of nieces and nephews, Matthew, Jessica, Amy, James, Alice, Michelle, Judy Anne, Tim and Stephen.

And of course by her beloved pet pussycat, “Lady Day”.