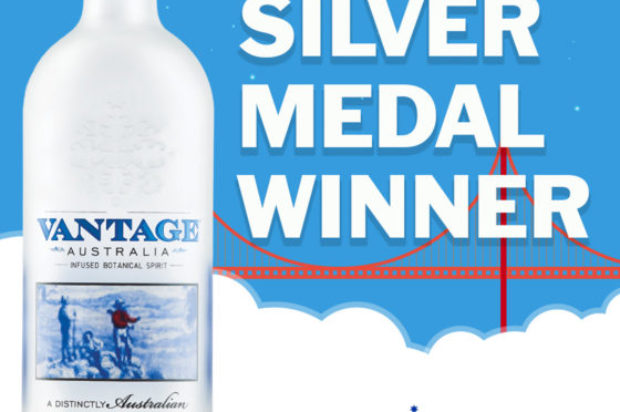 The San Francisco World Spirits Competition 2017 silver medal demonstrates that Vantage Australia is among the finest in the spirits industry, awarded for its ability to show refinement and finesse.

Vantage Australia was recognised for its multi-layered complexity, the smooth yet peppery mixture is made up of Australian botanicals, lemon myrtle, Tasmanian mountain pepper berries with a hint of mandarin oil from Australian produced imperial mandarins. Complimented with zesty citrus notes, this unique premium Australian tipple has the ability to cut across traditional spirit genres, making it the perfect base for most mixers while also giving life to old classics, with an Australian twist.

Riding on its 2016 success, where Vantage Australia won Best Innovation-Best in Class 2016 from the Australian Drinks Awards, the Aussie spirit was recognised for strong performance across key measures, including purchase intention, excitement, and relevance. Vantage Australia was honoured with this prize for having the highest level of uniqueness, reflected through its inspiration of Australian native flora. The complex flavour comes from only using natural bushfoods to create a blend that blurs the lines between sweet and dry, giving this multi-layered spirit the uniqueness that it has been nationally and now internationally, recognised for.

Vantage Australia continues to go from strength to strength and this year was also named as the official spirit of the 2017 TV Week Logie Awards. Vantage Australia’s debuted its signature cocktail, The Spirit of Melbourne to honour the stars at Australian television’s night of nights.

As the official spirit sponsor of the TV Week Logie Awards, Vantage Australia was sampled by over 500 of the best in the entertainment industry.

Where to from here, Vantage Australia continues to reach new heights with an invitation to participate in the upcoming TFWA Asia Pacific Exhibition & Conference which gathers together the region’s entire duty free and travel retail industry to showcase the hundreds of premium products available as well as creating an environment for networking, sharing knowledge and doing business.

While England has gin, Spain has sangria, Mexico has tequila and Russia has vodka, Australia is yet to put its own signature spirit on the map, until now. Always the forward thinker, Hargitay set his sights on developing and manufacturing a new uniquely Australian spirit product that would tap into a relatively untouched market. Targeting the duty free industry, Vantage has encouraged growth in this sector, while promoting Australian products to overseas markets and as a result has gained the attention of the Asia Pacific duty free and travel retail industry conference.

For more information of Australia’s most talked about spirit please visit: www.spiritofanation.com