China filmmakers Lionsgate VILLAGE ROADSHOW VR by Caroline Russo | on May 29, 2019 | 0 comments | in Entertainment | Like it 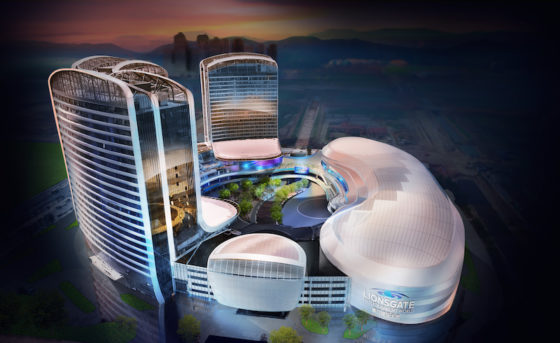 Australia’s Village Roadshow Theme Parks will operate one of China’s most technologically advanced theme parks, Lionsgate Entertainment World when it opens in Summer at Novotown, an integrated tourism and entertainment project in Hengqin.

Lionsgate Entertainment World will bring to life some of Lionsgate’s most successful movies, including The Hunger Games franchise, The Twilight Saga, Escape Plan, Gods of Egypt, Now You See Me franchise, and The Divergent Series into over 30 key attractions.

Lionsgate Entertainment World will also be one of the first theme parks in the world to use cutting edge technologies such as Virtual Reality and Augmented Reality in Theme Park attractions to offer guests a ground-breaking interactive and immersive entertainment experience.

Lionsgate Entertainment World’s General Manager, Selena Magill said this is a truly unique venue which will be a game-changer for theme parks.

“We are excited to be bringing this venue to life with Lionsgate and the Lai Sun Group to provide the people of China with a world-class entertainment and theme park venue,” she said.

“Lionsgate Entertainment World will offer some of the most unique and technologically advanced theme park rides and attractions in the world, all themed around hugely popular Lionsgate movies. “In addition to the state-of-the-art rides and attractions that were conceptualised by the Thinkwell Group, Lionsgate Entertainment World also offers a mesmerizing and world-class retail and dining experience, which will give guests a theme park experience like no other.” Race with Jacob and the wolf pack on a daring VR dirt-bike adventure through the moonlit woods. But beware, beyond these hallowed hills, a different kind of creature roams, and this one is out for blood!

Step into Bella’s shoes and journey through The Twilight Saga like never before. From love’s first kiss to the threat of the Volturi, the timeless blockbuster film series comes to life all around you.

Enter into the world of the VR Fear Simulator and test your fears by walking between skyscrapers and braving the darkness of a pitch-black maze. This engaging multi-sensory experience will have you questioning reality!

Take on climbing walls, suspended bridges and vertical drops in this zig zagging course that will put your balance and strength to the ultimate test. Will you reach the next level?

Gods of Egypt – Battle For Eternity

Experience the world’s first purpose built indoor Virtual Reality Roller Coaster as you trek through the desert of ancient Egypt and soar over pyramids in this epic adventure.

Suit up and take flight alongside the rebellion on this action-packed adventure through the world of The Hunger Games. Danger lurks around every corner, but hope is in sight on this exhilarating 3D motion simulator attraction. May the odds be ever in your favour!

Locked in the most secure prison ever built with guarding around the clock, you’ll need to work as a team to solve puzzles and overcome the obstacles to regain your freedom in one of the most technological advanced escape rooms in the world.