PHORIA, an award winning immersive technology studio, announced this week worldwide online release of ecosphere, their groundbreaking VR nature documentary series produced in partnership with Facebook’s Oculus, the World Wide Fund for Nature (WWF) and Silverback Films. The series is narrated by Emmy Award winning actress and WWF Ambassador, Anna Friel, and will be available to experience on Oculus Quest and Oculus Go VR headsets from June 8, 2020 via the ecosphere app.

https://vimeo.com/422385054/55ac8968e2. check Vimeo link!
ecosphere is an ambitious VR experience that immerses viewers in the wildest places on earth. The series features never-before-seen cinematic 5.7k stereoscopic VR footage at 60fps, shot with the latest pre-production 3D-180 cameras. Custom VR stabilising technology allowed filming to take place in incredibly technically challenging environments — from the air and deep into the ocean. Imagine that you are to Immerse yourself in the wildest places on earth and meet the humans protecting our most precious wildlife in the boundary-defying VR nature documentary series ecosphere. Explore the great savannahs of Kenya, discover the ancient jungles of Borneo and dive into the rich coral reefs of Raja Ampat. Encounter elephants, orangutans, manta rays and some incredible humans, all in stunning cinematic Virtual Reality (VR). Speaking with Joseph Purdam, who is Co founder-director of Phoria an award-winning international filmmaker who is based in Melbourne spoke on how the project began. It was with a bunch of friends that we worked together with the early Technolgy in google 2 years ago. This brought us working with the AR Team that ended up partnering with the project, which lead to present the project on the international global platform where it got commissioned.

This has been an amazing collaborative journey Mr Purdam says as I look back at where we filmed in Africa, to have engaged Anna Friel who is outstanding to her support of the project to this week it is the launch pad. It does set off all sorts of emotions, as it been a lot of work but I am so excited and eager to see the release of ecoshere with the amazing platforms it will have that will take the audience to a another place in a visual reality to feel and connect the world we have captured! 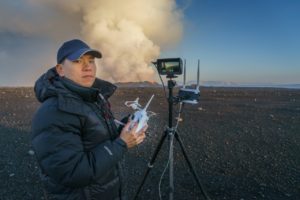 ecosphere will be gently guides viewers through some of nature’s most fragile and diverse ecosystems, highlighting indigenous and community-led efforts to protect our most precious wildlife. With an emotive original musical score, the series transports viewers into our extraordinary world — to the great savannahs of Kenya (Africa), the ancient jungles of Borneo (Malaysia) and the rich coral reefs of Raja Ampat (Indonesia).

Evocative storytelling takes place across ecosphere’s three episodes, as local communities come together to help nature recover from the impact of modern human life. The series focuses on uplifting and inspiring viewers, bringing home the idea that when human beings create space for nature, humanity and nature thrive together.