Set amongst the unconstrained, yet opportunist streets of Miami, “StartUp” weaves a complex and exciting narrative, featuring the high-stakes struggle of what one will do to reach ultimate success – but this is not your average startup incubator story… “StartUp” is about the emergence of a brilliant, yet controversial tech idea centered around digital currency that gets incubated on the wrong side of the tracks of Miami by three strangers who don’t necessarily fit the mold of “tech entrepreneurs” and a crooked FBI agent who will go to any length necessary to take them down.

Given the major impact and influence that technology has had on society, it’s no wonder it has become its own character on television with various dramas and comedies trying to recreate it, however, there will be a much broader picture of startup culture on our TV screens… One that spreads to various “bubbles” in the universe. And with the Miami ecosystem being primed as the newest tech hub in the US with the highest startup density in the country, we believe that “StartUp” will be at the very beginning of that conversation. 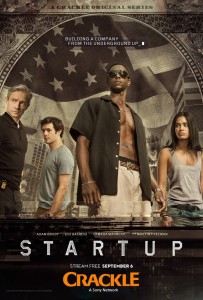 Stream Free September 6, 2016
Only on Crackle