MURIEL’S WEDDING THE MUSICAL
OPENS IN MELBOURNE TO RAPTUROUS REVIEWS

The highly acclaimed new Australian musical produced by Global Creatures,Muriel’s Wedding The Musical, has opened in Melbourne to rapturous reviews and been hailed a smash hit. This big, bold and brash musical is currently playing at Her Majesty’s Theatre where it will run until mid-June before opening in Sydney at the Lyric Theatre on July 4. Tickets are on sale now, visit www.murielsweddingthemusical.com for all details.

Reviewers are unanimous in their praise:

“Astonishing…A triumphant blaze of colour and emotion” – The Age

“Astonishing purely for what it says about the state of musical theatre in 2019: when was the last time a woman on stage told another – without irony or subtext – that she’s f—king amazing” The Age

“A star is born in this clever adaptation of a beloved Australian film.” – LimeLight

“Everything about this show is phenomenally good.” – Daily Review

“This is the sort of show you’ll want to see again and again. Do not miss it.” – Theatre People

“Leaving audiences in stitches for its risqué humour, to crying in their seats” – The AU Review

“Imaginatively conceived, ingeniously written and lavishly produced Muriel’s Wedding is surely the most impressive original musical ever created in Australia.” – Man In Chair

Leading the Muriel’s Wedding The Musical cast in the much-loved lead role ofMuriel Heslop is Natalie Abbott performing in her very first professional stage production. The Herald Sun said “Natalie Abbott is radiant as Muriel. And her grinning enthusiasm is utterly infectious”. The role of Muriel’s best friendRhonda is played by Stefanie Jones (Les Misérables, The Sound of Music, Dreamlover, Once The Musical) who also received accolades for her performance, with the Herald Sun saying “Stefanie Jones is an intense and vivid presence”.

Muriel’s Wedding The Musical is a theatrical version of PJ Hogan’s iconic hit film, updated to today by the writer himself with music and lyrics by Australian award winning songwriters Kate Miller-Heidke and Keir Nuttall with additional songs by Benny Andersson, Björn Ulvaeus, and Stig Anderson written forABBA.

MELBOURNE SEASON 2019
Her Majesty’s Theatre
Playing now through to mid-June
Tickets from www.ticketek.com.au

The Sydney season of Muriel’s Wedding the Musical is supported by the NSW Government via its tourism and major events agency, Destination NSW. 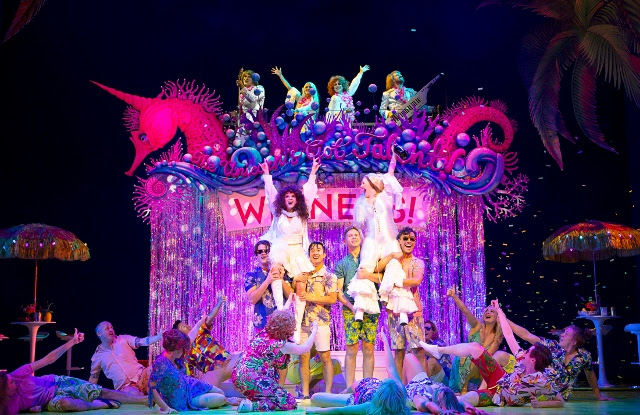