from 3,000 kilometres away to urban East Coast 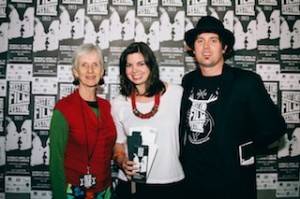 From one community to another; the big winners of the 4th annual West End Film Festival (listed below in full) included a Queensland father-son animation team, a NSW up-and-coming Director and a group from Yuendumu NT; winning $1,000 for the Indigenous Film Maker Award.

Although unable to attend the event through illness, a representative of Writer/Director Jason Japaljarri Woods of Yuendumu, NT said that he was delighted to receive the award and will put the money to future projects. His subtitled film Jack and Jones is a rare example of animation done in the native language of Warlpiri, spoken by only two and a half thousand people today in Australia. Festival Director and Founder Mike Witt says “As a grassroots community festival, West End Film Festival is delighted to be supporting films such as this from a small community in rural Australia. The film’s got a great message and is an extremely deserving winner of the Indigenous Film Maker Award.”

Cash prizes of $1,000 each were handed out to the following films at the community outdoor Rumpus Room cinema on the evening of Sunday 21st April 2013:

Industry Award – ‘Cockatoo’; a man with a broken heart tries to relive his failed relationship by hiring a young girl to play his ex-girlfriend, made by NSW Director Matthew Jenkin.

Community Award – ‘Ellipsis’; a teacher unexpectedly reveals details of her tragic relationship to her class. The film was represented by its Producer and proud West End resident – Sarah Taghaode. She says ‘It’s really nice to get the community award at an event like this as that’s who you want to be enjoying the film. I actually hadn’t seen it in a little while and it reminded me how touching it is.’

Animation Award – ‘Mud Crab’; Spike has just caught his first mud crab. Now he and Dadda have to remove it from the crab pot without losing a finger. Co-Director and Animator Igor Corie had not expected to win at the festival. He told us ‘This is one of a series of films – we try to make one a week where Sheldon [who voices Dadda] takes real recordings of life at home with his young son and then I put the pictures to it. We’ll definitely be using the prize money for future episodes.’

Indigenous Film Maker Award – ‘Jack and Jones’; Two Aboriginal boys grow up together in a remote community in Central Australia. They grow up together, go hunting together and even met their wives together. Trouble begins when one day they drive into Alice Springs and stop for a drink in the town camp. A representative of the film told us ‘The story is very true to what happens to people out there in Yuendumu. It’s great to be bringing that story and the Warlpiri language to a community on the East coast.’

The near-sellout evening concluded with a promise of an even bigger and better festival for 2014 when WEFF – as it is fondly known by its regulars – will be celebrating its 5th year. Director and Founder, Mike Witt, says ‘It’s been an incredible evening; the films have been excellent, the atmosphere has been electric and most importantly, the West End Film Festival supporters have come out in force. I can’t wait for next year.’