What Has Queensland Symphony Orchestra have in store!

handel messiah lam soprano womens chorus by Caroline Russo | on September 10, 2018 | 0 comments | in arts | Like it Fantasy Sounds, Movie Music, The Bard, Tradies and Artists, Mahler and Beethoven…. just a taste of what the Queensland Symphony Orchestra has in store!

Sunday 30 September from 11.30am, Concert Hall, QPAC (Music on Sundays)
THE BEST OF MOVIE MUSIC
Conductor and Host Guy Noble
Movie buffs, this concert is for you! Come along and enjoy the beauty and power of some of cinema’s finest soundtracks in this concert fit for everyone. Savour the dark power and menace of Thunderball with its trumpets, piercing French horns and soul-stirring strings. Be lost in the bittersweet themes of the classic La Dolce Vita. Embrace Morricone’s nostalgic score for Cinema Paradiso, which adds depth to every scene. And try and stop yourself from crying as Lai’s award-winning Love Story reminds you of the film’s tragic tale. Music on Sundays is proudly supported by ABC Radio Brisbane and The Public Trustee.

Friday 5 October from 11.00am, Concert Hall, QPAC (Morning Masterworks)
BEAUTY AND POWER
Conductor Carlos Kalmar Violin Arabella Steinbacher
Bruch’s Concerto No.1 is a fiery, demanding treasure that scales the highest peaks and lowest reaches. Laced with sudden leaps, there’s a charming volley of call and response in the Prelude. Its lavish tune and violin virtuosity assures its future as a repertoire staple. Walton’s remarkable First Symphony is volcanic in its driven stirring intensity, with a finale that is herculean in scale. What a concert! Morning Masterworks is proudly supported by 4MBS Classic FM.

Saturday 6 October from 7.30pm, Concert Hall, QPAC (Maestro)
THE BARD AND BEYOND
Conductor Carlos Kalmar Violin Arabella Steinbacher
If every piece of music is like an act in a play, then together these three pieces of music create a work that is Shakespearean in its depth and scope. It’s hard to believe that Mendelssohn wrote A Midsummer Night’s Dream at the tender age of 17, as incidental music to Shakespeare’s play. It boasts striking effects, with different instruments and passages used to conjure people and places – including a braying ass in the strings. Bruch’s Concerto, meanwhile, is fiery and demanding; it scales the highest and lowest reaches and surprises the listener with sudden melodic leaps and pace changes. Which leaves us with Walton’s Symphony in finale – herculean in its grandeur and surging intensity, it screams, despairs and finally roars. Pre-concert talks at 6.30pm.

Sunday 14 October from 11.30am, Concert Hall, QPAC (Music on Sundays)
Tradies and Artists
Conductor Dane Lam Host Guy Noble
It turns out great music can be inspired by all sorts of things – including tradesmen and trade guilds. For example Zar und Zimmermann, Tsar and Carpenter, is a comic opera set in shipyards. Max, the hero of Weber’s Der Freischütz is a forester and marksmen. Wagner’s Die Meistersinger features the 16th century Meistersinger (Master Singers) guild, an association of amateur artists who are master craftsmen. By contrast, The Great Gate of Kiev was written about looking at a painting by Hartmann. So who knows where inspiration can strike! Music on Sundays is proudly supported by ABC Radio Brisbane and The Public Trustee. 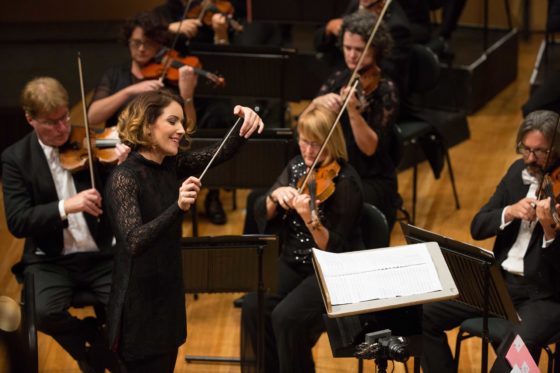 Thursday 25 October from 7.30pm, Concert Hall, QPAC (Maestro)
BEETHOVEN’S HEROIC SYMPHONY
Conductor Alondra de la Parra Music Director Double Bass Edicson Ruiz
Tonight, we’re all about revolution! Mozart’s three-movement template for the Paris Symphony may have been traditional but the striking inclusion of clarinets in the orchestra was a revolutionary first. Beethoven’s stormy, affirming Symphony No.3, meanwhile, was crammed with daring musical invention dedicated to Napoleon (although he scored out the dedication when Napoleon appointed himself Emperor) and its revolutionary orchestration inspired many generations of future composers. A highlight of this concert is the world premiere of Oscher’s lively and inventive Double Bass Concerto destined to leave the entire audience breathless! The Queensland Symphony Orchestra Music Director is proudly supported by Tim Fairfax AC. Pre-concert talks at 6.30pm.

Saturday 24 November from 7.30pm, Concert Hall, QPAC (Special Event)
ALONDRA CONDUCTS MAHLER 3
Conductor Alondra de la Parra Music Director Mezzo Soprano Lilli Paasikivi
Women’s Chorus from The Australian Voices
Children’s Chorus from Voices of Birralee
Gustav Mahler’s Symphony No.3 is one of his brightest, most extroverted scores. Be enthralled by its grandeur, poetic melodies and show-stopping brilliance. It’s a whopping symphony, the forces are huge and it scans a vast perspective of the composer’s views on the human condition. Lilli Paasikivi returns to Queensland Symphony Orchestra from her native Finland to sing this vocally-infused work. Previously, she sang in our Das Lied von der Erde and the Rückert Lieder to great acclaim. Lilli Passsikivi is a supreme storyteller. Her voice is not only beautiful but an ideal match for Mahler’s magnificent works. Get ready to be amazed! Queensland Symphony Orchestra Music Director is proudly supported by Tim Fairfax AC.