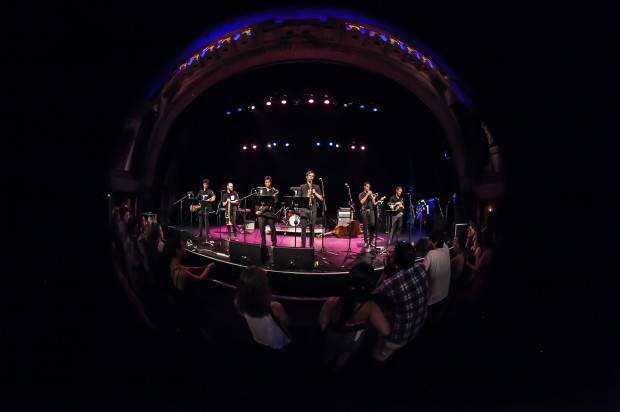 White Night Melbourne, Australia’s only all night celebration of culture and creativity and a genuine urban adventure returns for the fourth year for one night only on Saturday 20th February 2016 from 7pm to 7am, featuring local, national and international artists and works.

Embark on a journey of discovery through the heart of Melbourne, with music, food, film, art, and light. The 2016 program will present major Australian and international artists with performance, illuminations, art installations and music in and on some of Melbourne’s most iconic spaces including the Royal Exhibition Building, Federation Square, Melbourne Town Hall, Melbourne City Baths, Arts Centre, State Library, National Gallery, Melbourne Museum and ACMI.

Award-winning young Indigenous artist Josh Muir will present Still Here, an illuminating artwork telling a story of Aboriginal people in Victoria on the expansive façade of the National Gallery of Victoria.

Acclaimed Melbourne artist Lisa Roet will bring her own vision of monkey magic with Golden Monkey to Melbourne Town Hall.

In a White Night Melbourne special collaboration, the Royal Exhibition Building will once again be transformed by Portuguese lighting and projection artists OCUBO, this time in partnership with the Ballarat and District Aboriginal Co-operative Pitcha Makin Fellaz reinterpreting traditional storytelling in an exciting contemporary project.

Melburnians will be invited to unlock Arts Centre Melbourne secrets and mysteries with two interactive installations that put the audience in control. Cmd Ctrl, Decipher will for one night only, from the forecourt podium, let audiences take command of this iconic landmark and create a 162 metre light show of their own.

Down below at the Melbourne City Baths, White Night favourite, Craig Walsh will empty the pool of bathers and transform it into an aquatic breeding ground with Incubator.

From the Boogie Woogie and the Boogaloo to Bollywood or Ballroom, Breakdancing or Burlesque, the White Night dance marathon will be back. Trip The Light Fantastic for 12 hours of choreographed chaos in the massive open air dance floor of Birrarung Marr.

Federation Square will come under the spotlight within Wonderland as internationally acclaimed Indigenous artist Reko Rennie transforms Melbourne’s favourite meeting place into an electric canvas of light and sound with Federation2.

Grooves on Bourke Street for the cool cats and hip dudes and Live on Lonsdale will go live and loud with musos spanning pop to rock and everything in between for the night long.

In 2016 the precincts will include The Big Top at the Carlton Gardens, Royal Exhibition Buildings and Melbourne Museum. Northern Lights from Lonsdale Street north to RMIT, State Library of Victoria and the Melbourne City Baths. Monkey Business will incorporate the CBD, Flinders Lane and Bourke Street Mall, Wonderland will again be located at Flinders Street, Federation Square and Birrarung Marr and Southern Lights will include the NGV, Arts precinct, Alexandra and Queen Victoria Gardens.

Minister for Tourism and Major Events John Eren said today, “Victoria has a proud history of producing some of the world’s top artists, and White Night Melbourne is their big break.”

“White Night Melbourne brings visitors to Melbourne from all over the state and further afield. They’re here keeping our businesses busy and our economy strong.”

Artistic Director Andrew Walsh AM commented on his fourth White Night Melbourne program, “In just 4 years White Night Melbourne has become the city’s largest and most loved public event and this year we promise many never before seen elements about Melbourne, made by Melburnians and reflective of Melbourne’s place in the world.”

“We’re really excited to have commissioned a range of original works from Melbourne and Victorian artists, as well as several international artists.”

Walsh added ”Since we commenced the White Night journey, more than 1,600 artists have contributed to turning Melbourne on its head where the impossible is possible, where the day meets the night. Come and join us for our fourth adventure from dusk till dawn 7pm Saturday 20 February to 7am Sunday 21 February 2016.”