WINTER Is Coming & So Is Game of Thrones 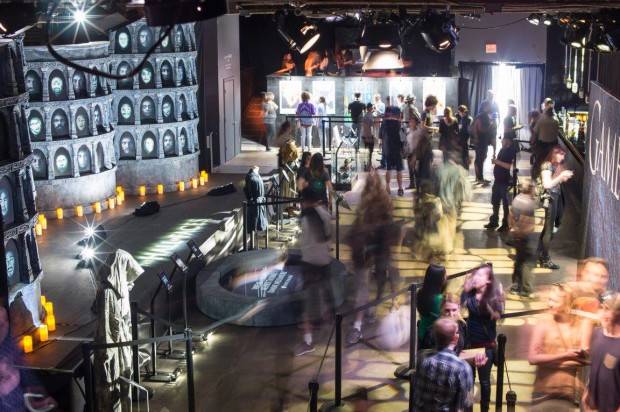 GAME of Thrones, Showcase Foxtel, Mondays 11am and 7.30pm from 25 April
WINTER is coming and so is Game of Thrones.
THE long wait for an Australian screening date is over with FOXTEL announcing this morning they will broadcast season six of the worldwide TV phenomenon Game of Thrones at the same time as the US east coast, in a global simulcast spanning 170 countries.
However their timing may be a bit off with the first episode due to go out at 11am on Anzac Day.
The screening is in-line with the east coast of the US and will continue for the whole series. However with many Australian’s out at Anzac Day ceremonies at that time it might be a case of waiting for the encore at 7.30pm.
This year will have added interest for Australian fans with Miss Fisher herself, Essie Davis joining the cast of this international monolith which seems to be going from strength to strength.
This year, after the shocking developments at the end of Season Five – including Jon Snow’s bloody fate at the hands of Castle Black mutineers, Daenerys’ near-demise at the fighting pits of Meereen, and Cersei’s public humiliation in the streets of King’s Landing – survivors from all parts of Westeros and Essos regroup to press forward, inexorably, towards their uncertain individual fates.
Familiar faces will forge new alliances to bolster their strategic chances at survival, while new characters will emerge to challenge the balance of power in the east, west, north and south.The most-watched series in HBO history and a worldwide TV phenomenon, Game of Thrones remains a huge runaway hit for the network.
Based on the bestselling book series by George R.R. Martin (who remains a co-EP on the show), Game of Thrones is set in the fantasy continents of Westeros and Essos, where summers and winters can last years. Season 6 was shot in Northern Ireland, Spain, Iceland and Croatia.
Game of Thrones has received 86 Emmy Award nominations since 2011, including five consecutive Outstanding Drama Series nominations, and has won 26 Emmys The show won a record-shattering 12 Emmys in 2015, including awards for Drama Series, Writing (David Benioff and Dan Weiss), directing (David Nutter) and supporting actor (Peter Dinklage).
Game of Thrones’ returning cast is led by Peter Dinklage (The Station Agent, two Emmys® for this role) and includes Lena Headey (300), Emilia Clarke (Terminator Genisys), Nikolaj Coster-Waldau (Oblivion), Aidan Gillen (The Wire), Kit Harington (HBO’s 7 Days in Hell), Diana Rigg (The Avengers, Emmy® nominated for GoT), Sophie Turner (the upcoming X-Men: Apocalypse) and Maisie Williams (The Falling, Doctor Who).
New cast members for S6 include Max Von Sydow (The Exorcist) as the Three-Eyed Raven (recast); Freddie Stroma (the Harry Potter films) as Dickon Tarly and Richard E. Grant (Downton Abbey, Doctor Who), Australia’s own Essie Davis (The Babadook) and Ian McShane (Deadwood).
And if you are fan and can’t get enough SHOWCASE will be screening a number of specials to get you in the mood. Wednesday, 6April 6, 7.30pm Game of Thrones: The Story So Far (90 minute special). Monday 11 April, 8.30pm Game of Thrones: Best Moments (2 hour special); Monday, April 25 11am and encore at 7.30pm – Game of Thrones Season 6. Every Tuesday at 10.45pm from April 26 – Throne Cast