#wayoutwest #WWOWF Australia Music OUTBACK winton by Caroline Russo | on October 13, 2020 | 0 comments | in FESTIVALS | Like it 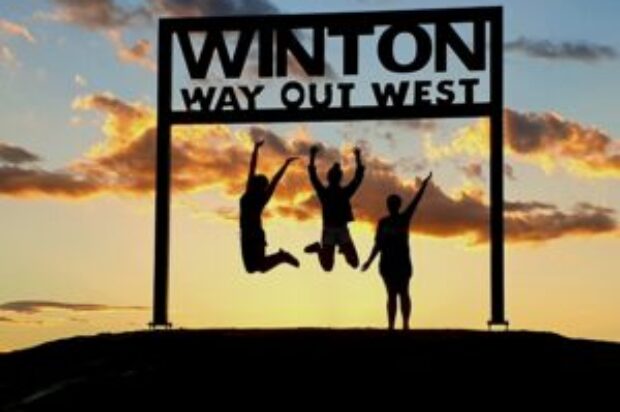 Get ready for one of Queensland’s most anticipated music festivals…

After a 12-month pause, the iconic Winton’s Way Out West Festival will return bigger than ever in April 2021 with a star-studded all-Aussie line-up, bringing more than 100 Australian artists and musicians together for six incredible days and nights of entertainment across seven venues in one of the world’s most unique outback locations.

Winton in Central West Queensland has shaped the nation with a love of country music and the beautiful Aussie Outback. Next April, the birthplace of QANTAS and Waltzing Matilda will come alive once again to host a myriad of entertainment that celebrates its roots in classic Australiana.

Way Out West will be held during the Easter school holidays (Tuesday 6th – Sunday 11th April, 2021), kicking off on Waltzing Matilda Day and continuing into the weekend with a roaring curated program of entertainment to complement the stunning sunsets and iconic Aussie scenery that has brought Winton to the world stage of iconic destinations.
The weekend main stage headline performances feature some of Australia’s biggest names in music. Let’s get down to the nitty gritty and have a look at the awesome line-up… “Winton’s Way Out West Fest has quickly become a must on the annual calendar for travellers and lovers of great music.” Says Winton Shire Mayor Gavin Baskett. “A road trip to the outback for the WWOWF in 2021 is the perfect way to help kick start our region’s tourist season and economy. Of course, we will be following the guidance provided by governments to ensure the safety of all patrons with regard to Covid-19. However, as we have not had any recorded cases to date, the Queensland Outback will be a very popular destination as restrictions are progressively lifted. So get in early, secure your tickets and start planning for an outback adventure in Winton.”

Visitors are also encouraged to take time to experience this very special part of outback Australia and take in the breathtaking surroundings and enjoy the friendly atmosphere as the whole town celebrates its unique history.

Winton is one of the world’s most unique locations, bringing travellers from near and far to take part in world-renowned birdwatching, embark on self-drive outback adventures, and fossick for opals in Queensland’s Opal Capital.

Also known as the Dinosaur Capital of Australia, Winton is home to the world’s largest collection of Australian dinosaur fossils at the Australian Age of Dinosaurs Museum.

Learn the story of the Outback region at the award-winning Waltzing Matilda Centre, assemble a band to play the musical fence, or simply sit back and enjoy the music. Check out more to do in Winton.

Along with an extended festival program, the schedule of events and family-friendly entertainment will include a series of uniquely curated offerings held in the historic Winton Shire Hall and the wonderfully rustic Royal Open-Air Theatre, including:

The Salute to Waltzing Matilda, a special concert held on the annual day the Shire of Winton celebrates the history and impact of Banjo Patterson’s “Waltzing Matilda”, which was first performed at Winton’s North Gregory Hotel in 1895.

The finest gathering of Australian musical story-tellers at the Aussie Bush Balladeers Show, inspired by the works of classical Aussie poets such as Banjo Patterson and Henry Lawson, featuring iconic songs such as ‘When the Rain Tumbles down in July’, ‘Lights on the Hill’, and ‘By a Fire of Gidgee Coal’.

The screening of a new-release documentary ‘SLIM & I’ which will be accompanied by a special performance by Small Town Romance which features three generations of Slim and Joy’s family, followed by a live Q&A with celebrated songwriter Joy McKean; the daughter of Slim & Joy, Anne Kirkpatrick, and Anne’s son and daughter-in-law, James Arneman and Flora Smith.

“I’m really excited to be performing at Winton’s Way Out West Fest in 2021. Outback Queensland and in particular Winton, and Boulia, hold some very special memories for me of childhood days spent travelling and touring there with the Slim Dusty Show.” Anne Kirkpatrick reminisces, “I remember performing many times in the grand old Shire Hall at Winton, so it will be fantastic to be back there again and joined by my Mum Joy, son James and his wife, Flora. After being locked down for so long, it will be a real reason to celebrate live music again in the outback. I for one can’t wait for April.”

Tickets are on sale now with lots of hotel and camping options available as well as an exclusive VIP option. Get tickets HERE