WORLD PREMIERE PALE BLUE DOT AND A MUST SEE 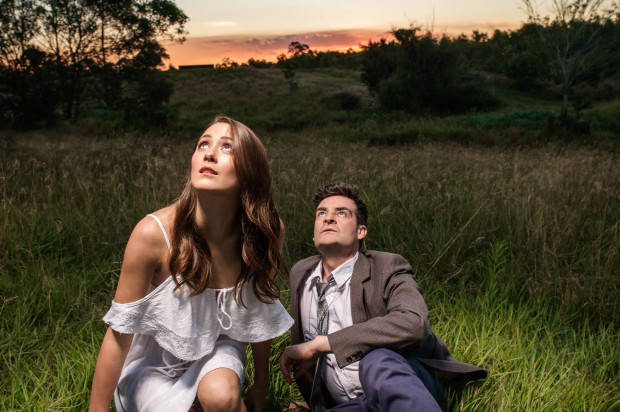 From the minute it started to the very end this gave you pure entertainment plus and with a outstanding cast, and writer, and director, PALE BLUE DOT IS A MUST SEE!

Pale Blue Dot is captivating comedy about aliens, alienation and the terrifying and comforting thought that we are not alone. Joel Pinkerton played by Hugh Parker (Gallipoli: Nine Network, The Killing Field: Seven Network, Sea Patrol: Nine Network) is an Insurance Fraud Investigator. Mr Pinkerton never gave much thought to the UFO abduction insurance introduced by his company as a publicity stunt a few years ago until Greta, an old German immigrant, takes out a claim. Hugh is perfect for this role and he opens the play with some great lines which just brings this in a great place and you know you then this is going to be good.

As he investigates the possibility of the alien abduction of 16-year-old schoolgirl Storm, played by Brisbane local Ashlee Lollback, he is not only drawn to conspiracy theories but to her, becoming alienated from his own wife, Holly and their newborn baby girl.

Pale Blue Dot was written by Marquet during her time in the La Boite Playwrights-in-Residence program. This program allows local playwrights the opportunity to develop a new work as a part of a year-long process with leading dramaturgs and La Boite Theatre Company.

Award winning director, Michael Futcher said he believes that there are very few people alive who haven’t considered that we may not be alone in the universe.

“The play deals with the extra-terrestrial sense of this question, but also the more human aspect of it. Amidst the backdrop of alien abductions and disappearances we see each character wrestling with a psychological alienation of their own,” said Futcher.

A highlight of the production will be the projection design by optikal bloc (Mountaintop: QTC, 1984: shake&stir theatre co & QPAC).The projections will create a vivid visual world for the characters to inhabit. They will also explore the extraterrestrial realm of the play. Amazing effects here.

Lucy Goleby, is the wife of Mr Pinkeerton and again amazing performance as the frustrated mum of a new born. Caroline Kennison who I have seen in many roles over the years and is one very fine actress but in this playing 2 roles the german mama and the delightful part of a UFO teacher investigator who adds so much humour to this.

Pale Blue Dot is the first production at La Boite Theatre Company since Chris Kohn took up the role as Artistic Director. Well Done to all who took part and all I can say is dont miss this galactic universal play which gives you value plus and more.