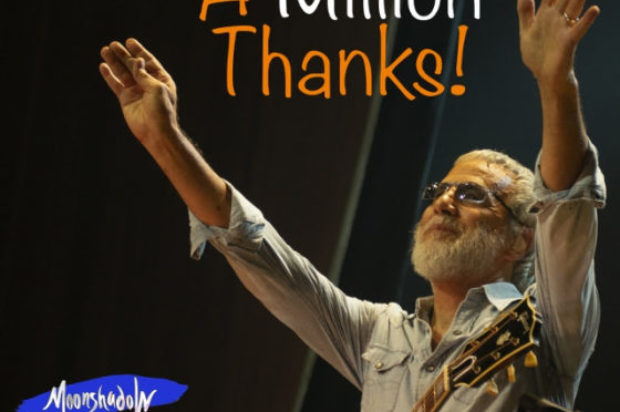 Yusuf / Cat Stevens, legendary singer/songwriter and humanitarian has donated over one million dollars from his ‘A Cat’s Attic’ – Peace Train Tour’ to support local and international charities.

A host of Australian charities are being engaged to develop programs that give back to the community. The first to receive support will be drought-afflicted farmers through the ‘Rural Aid Australia’, elderly citizens through the ‘Gallipoli Home Care Centre’, cancer sufferers through the ‘Olivia Newton-John Cancer Wellness and Research Centre’, and many more to be announced in the coming weeks.

At the end of last year, Paul Dainty, in collaboration with Moonshadow Australia Pty, brought Yusuf and his band to Australia and New Zealand where he performed to packed arenas in 9 cities across the continent. Performing such classics as Father & Son, Morning has Broken and Wild World, crowds sang along and enjoyed his latest songs from the critically acclaimed, Grammy-nominated album “Laughing Apple”.

Yusuf said “I believe that concerts are positive opportunities to receive as well as to give back, making people happy is what I love to do.”

As well as supporting these organisations, funds will also be channelled through Penny Appeal to launch a new initiative directed towards health, education and emergency relief. ‘Peace Train’ buses and mobiles will soon begin rolling in the UK, South Africa, Australia as well as other regions across the globe.

Aamer Naeem (Global CEO, Penny Appeal) comments “Yusuf has shown us over the years what a true humanitarian he is, we are honoured to be working alongside such an inspirational figure. Peace Train will help bring communities together, through compassion and love, spreading peace and putting others first.”